During my last visit to North Karnataka region, I covered a few beautiful temples in Hubli-Dharwad and Gadag districts. Here are a few more jewels from the Haveri district of Karnataka.

Most of my visits to my in-laws place in Sonda have been extremely fruitful. Over the last few years, I have mostly seen all the places of interest around Sonda and Sirsi region. So these days, I am exploring some of the old temples in the North Karnataka region. During my last visit, I could not see the temples of Haveri district due to time constraint. This time I was all set with the required information and the necessary permission for photography from ASI.

I had booked a Maruti Omni for travel, however not many in the house were ready to accompany me, thanks to the harsh Sun. In this hot weather of mid march, it needs a bit of motivation to venture intosuch unknown, rarely visited temples! Finally it was me, my wife and other two kids.

Here is a list of temples in the order I visited this time:

As last time, I won’t dwell into the architectural details of the temples as these are covered in the wikipedia links I have provided with each of these temples and also I am not qualified to explain that 🙂

Hangal is at a distance of around 60km from Sonda towards Haveri.  As you enter Hangal, there are Karnataka Tourism’s sign boards to guide you to the temple. As is norm with any of such temples in Karnataka, to reach Tarakeshwara temple, one has to negotiate quite a stretch of narrow winding roads amidst human settlements to reach the temple. From the entrance of the temple, the complete temple is not visible and it looks like a normal temple. But once inside the temple premises, the grandeur of the temple becomes evident.

The temple is huge with many decorated pillars. The main attraction is the delicately decorated huge ceiling.

The are attractive carvings inside the temple. 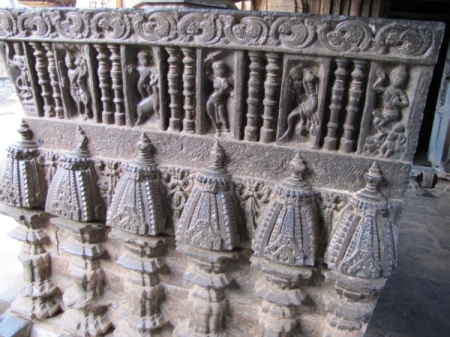 The work on the exterior of the temple is grand and noteworthy. 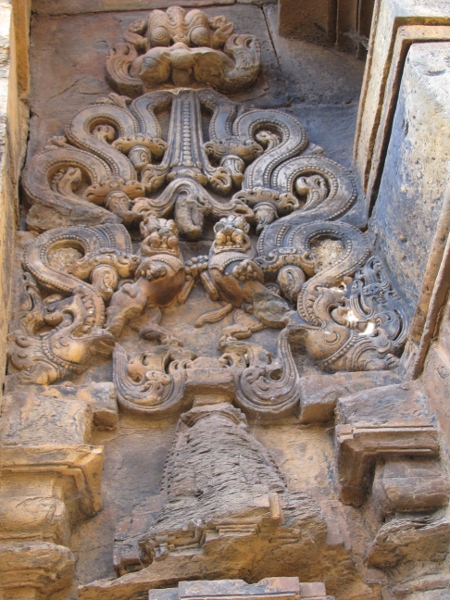 There is a small Ganesha temple with a Nagara style Gopura near the entrance of Tarakeshwara temple.

This mostly looks like an abandoned temple and partly destroyed.

The Shiva Linga is unsually big.

The decorations on the temple entrance are interesting.

The temple is mostly in dilapidated condition and would do good with some restoration. 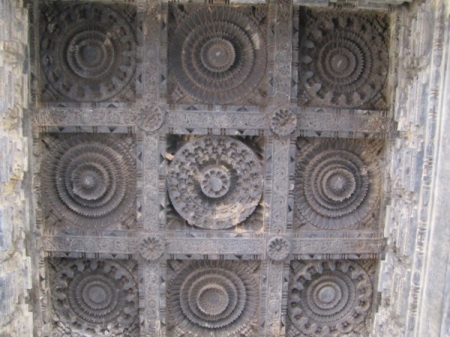 Bankapur is around 25km from Hangal and is more famous for the Peacock sanctuary. Nagareshwara temple is located inside the sanctuary. 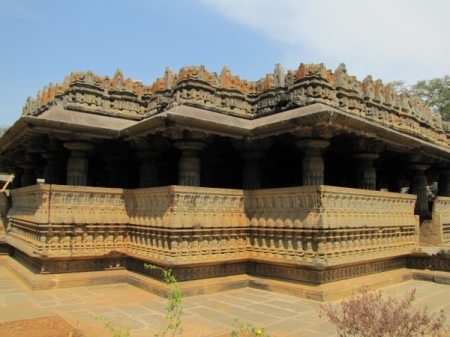 The temple was undergoing restoration and was closed when we visited, but thanks to the ASI official, we got permission to enter.

The temple is big with many pillars. The style of the ceiling reminds us about the ceiling of Hangal’s Tarakeshwara temple.

The entrance of the Garba Griha is well decorated. 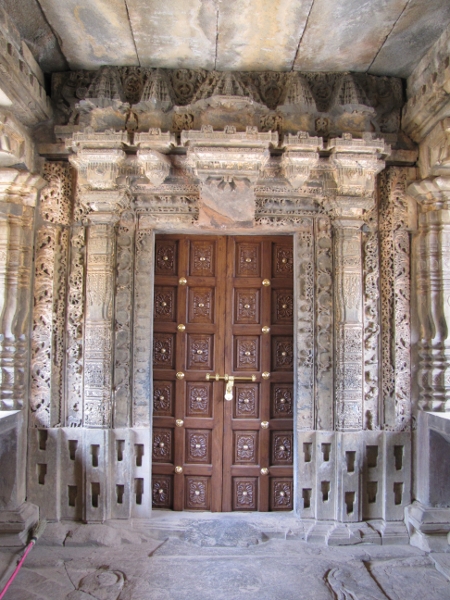 There are beautiful carvings on the exterior walls of the temples. 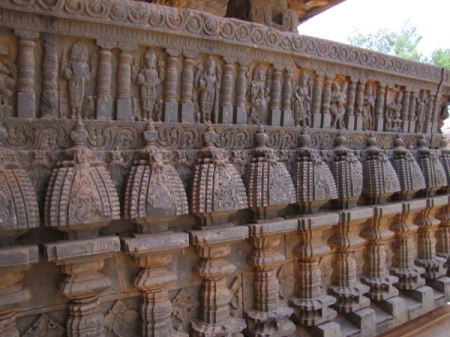 Curiously a miniature coffin-like structure with Urdu inscriptions can be found in the temple premises! 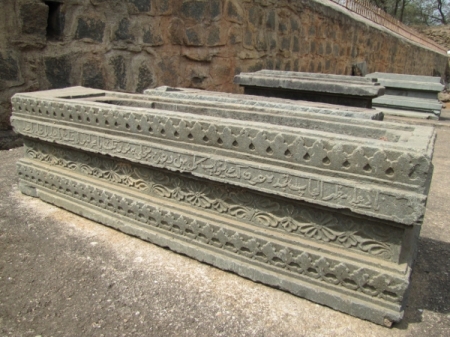 Siddeshwara temple is located in the Agadi road in the Haveri town itself.

The temple is attractive with richly decorated Gopura.

Unlike other temples in the region, this temple is devoid of any adjoining human settlements and ASI has done a good job of maintaining the huge temple complex.

Choudayyadanapura is a village located roughly around 40km from Haveri town. Since I wasn’t carrying any map, it took some effort to find the directions to this temple. From Haveri town, proceed on the road to Agadi and after around 25km, take a right deviation into Ranebennur road to reach Choudayyadanapura.

Muktheshwara temple is located on the banks of River Tungabhadra. 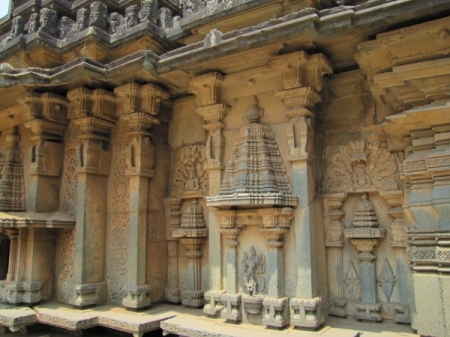 There is Someshwara temple in Haralahalli village somewhere around this area, but nobody was able to give us right directions to Haralahalli.

The temple is beautiful, but the Gopura has lost its original beauty since it has been painted.

There are some exquisite carvings in the temple entrance. 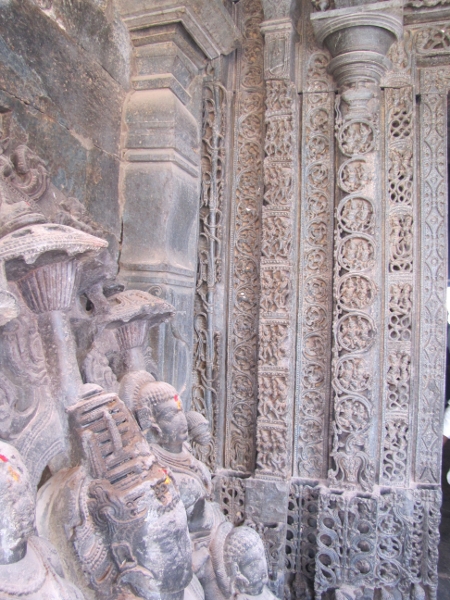 The top portion of the Garbha Griha has some elaborate carvings.

To reach Galaganatha village from Haveri town, proceed on the Agadi road and reach till Guttal (25km). From Guttal, Galaganatha is around 15km.

The pain of travelling in the midday sun was all forgotten when we landed at the Galageshwara temple which is located on the banks of Tungabhadra river.

This temple is very different from other temples of the area since the Gopura seems like raising from the ground! 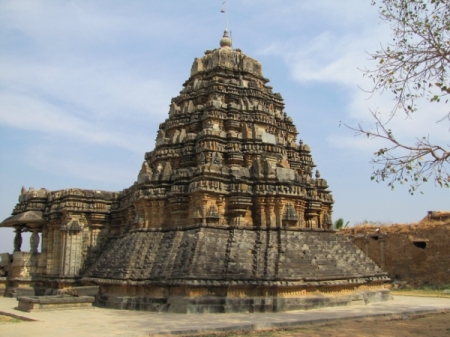 This temple is worth visiting anytime for its uniqueness. 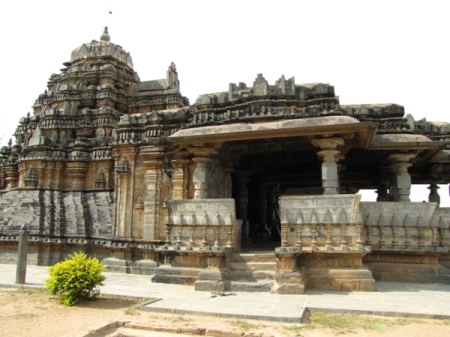 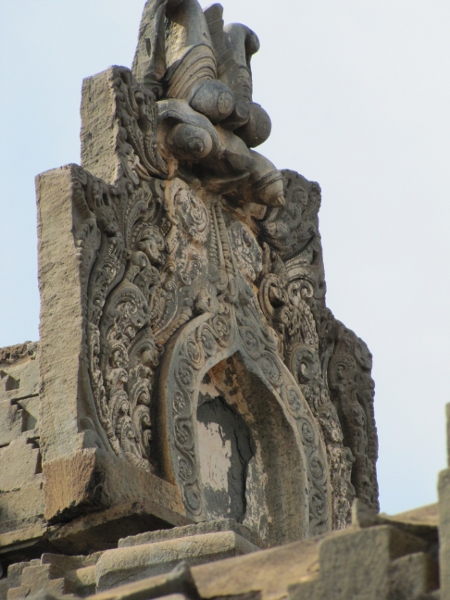 After visiting all these architecturally wonderful temples of the North Karnataka region, one wonders why they aren’t in the tourist circuit of Karnataka. When it comes to temples of Karnataka, we hear mainly Hampi, Belur, Somanathapura, Badami and Pattadakal. There are so many jewels like these which are waiting to be explored.