The WordPress.com stats helper monkeys prepared a 2013 annual report for this blog.

The concert hall at the Sydney Opera House holds 2,700 people. This blog was viewed about 22,000 times in 2013. If it were a concert at Sydney Opera House, it would take about 8 sold-out performances for that many people to see it.

My last tryst with Karnataka Western Ghats was in 2011 when we trekked to Deepadakallu and Jenukallu peaks from Maragunda. A couple of disturbing incidents involving trekkers getting lost/killed in the forests  dissuaded us from exploring any new routes. Having completed most of the exciting trails in Charmadi and Shiradi range, we were mostly content doing an yearly Himalayan trek. But after a partially successful Himalayan trek to Saraumga Pass, we were longing to get back to the forest trails of Western Ghats. There are only a few options if you want to trek in Karnataka Western Ghats with proper permission from Forest Department – Kudremukha and Kumara Parvatha come to my mind. Since I had done Kumara Parvatha already twice, we decided to do the famous Kudremukha peak.

Kudremukha peak seen on the left side of Gaumukha peak

Kudremukha has become synonymous to trekking in Karnataka and it is a favorite beginner’s destination. Though we knew it would be crowded during the weekends, we decided to go ahead since it was one of the few officially permitted trekking trails. The trek was planned for the last weekend of November. The group comprised of 7 trekkers: Naren, Austin and his friend Prashanth, Preeti, Pradeep and I. The group had two beginners: Preeti for whom this was her first Western Ghats trek though she had done Animal Pass Himalayan trek earlier this year and Pradeep who was an absolute fresher. I contacted Sathish from Mullodi village at Kudremukha base who provides lodging and guide services to the trek. Logistics-wise this is an easy trek since everything including permission, food, guide and accommodation was being arranged by Sathish. 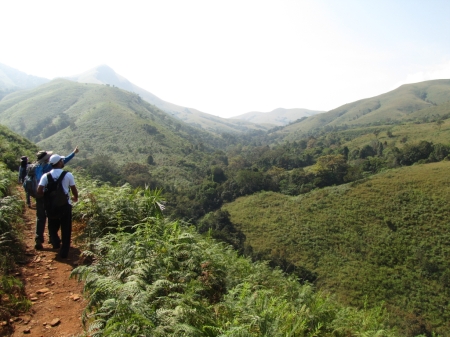 We boarded the Horanadu bus on Friday night from Bangalore. What to expect in next 2 days was evident when we got a a bunch of over-excited trekkers in the bus for company who hardly allowed us sleep. We reached Kalasa at 7AM where Austin and Prashanth joined us. Next it was again a short bus journey to reach Balagallu village. From there it was an uphill climb through the winding roads in a jeep and we reached Mullodi village at 9AM. Mullodi village (1180m) is situated at the base of Kudremukh mountain range. Our accommodation was arranged in Sathish’s house which would be hosting 15 other trekkers we were told earlier. But we were surprised to find out that there will be at least 50 more trekkers camping at this house for the night. Fortunately most of the people had already started the day’s hike, however there were still enough people to form a queue at the only one bathroom that was present at Sathish’s house. Since bath was out of question, we gulped down super-hard idlies with a beverage that tasted like anything but tea. 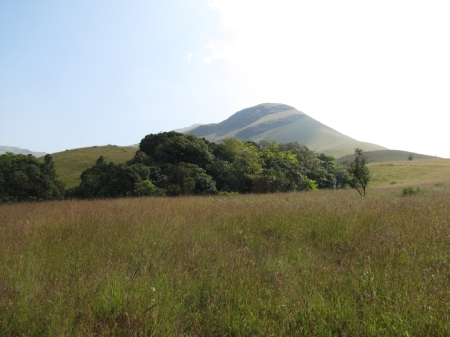 After paying the Kudremukha National Park entry fees and trekking fees (Rs 275/- per person per day) to a forest department official who was present at Sathish’s house, we hit the trail with a guide at 10AM. There are two main routes to the Kudremukha peak from Mullodi. First one is a longer one that touches Gaumukha peak. The second one is a more direct route to Kudremukha peak with the trail distance of 10km one way. We chose the direct route since longer route was out of question when we start the trek as late as 10AM.

The trail quickly leaves the village behind and enters the forest. We crossed a couple of streams in the forest and by 10.30PM, we could see Gaumukha, Durgadabbe and Kudremukha peaks clearly. Hirumarguppi (Thirumalaguppi – the corrupted form) was also visible towards our left. By around 11AM, the real ascent started and we met scores of other trekkers who had started before us. The groups had too many first timers and hardly followed any trail discipline by resorting to extreme shouting and whistling. Unwilling to spoil our trek, we increased our pace to maintain a considerable distance from this noisy crowd. The pace set by Preeti, Pradeep, Naren and I was a bit too high for rest of our folks to follow and we gradually left them as they settled into their own pace. 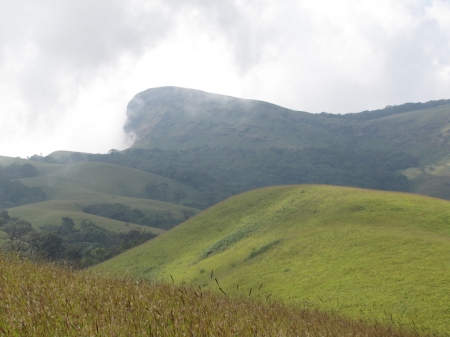 Kudremukha peak is at around 1800m, so this trek involves an scent of 800m from Mullodi village. While the ascent is mostly gradual, the final ascent to the ridge line which leads to the peak is challenging. The guide took us via the straight ascent path instead of the usual zig-zag winding route. We made good progress, thanks to the oranges we were carrying in plenty. At 1PM we reached a stream and were just 100m below the peak. We completed the packed lunch provided by Sathish. Unlike our other treks where we carry our own food stuff with us, in this trek we had completely outsourced food and stay to Sathish. I had to force the chittranna down my throat due to lack of other food options. Here we decided to wait for rest of our group and they joined us at 1.30PM. 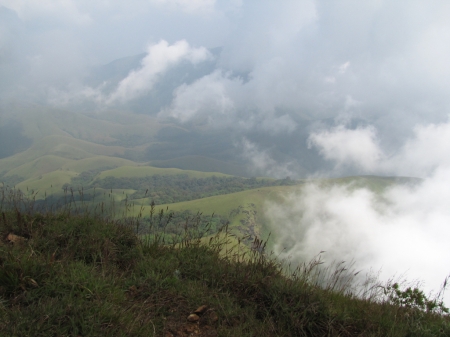 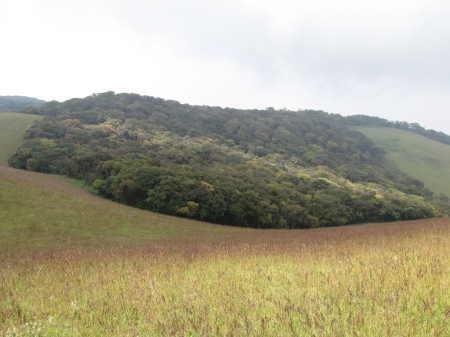 The final 100m assault to the peak turned out to be easier than anticipated and we reached the Kudremukha peak at 1.45PM. As we reached the peak, another group which had come via the Gaumukha route left giving us some silent moments on the peak. The weather was mostly cloudy and cleared up intermittently to give us glimpses of the mountain range around Kudremukha peak. Our guide offered to take us down via the longer Gaumukha route, but we declined since some of our folks were really tired and we wanted to reach the village before it turned dark. It does become dark very early in the forests in the winter. 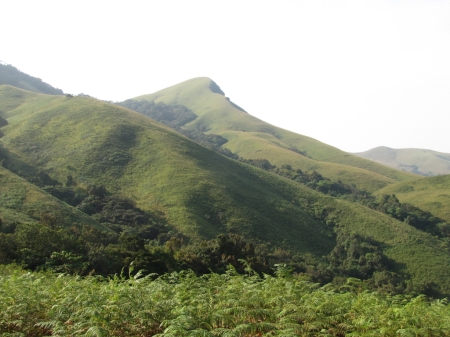 As the noisy crowd of trekkers started to arrive at the peak, we made an exit at 2.30PM. The descent turned out to be longer and strenuous than anticipated. The trail which we had covered enthusiastically in the morning now appeared to be never ending and we dragged our feet along to reach Mullodi at 5.30PM. We had left Austin, Prashanth and Chinmay with the guide behind and they reached around an hour later. 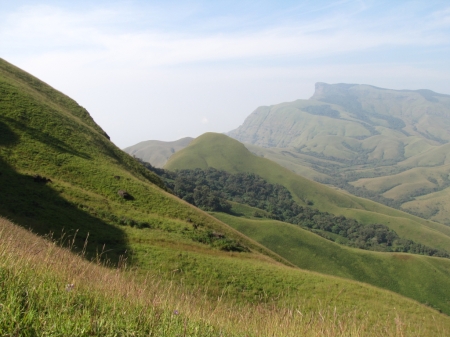 The sight at Sathish’s house wasn’t that pleasing as new bunch of trekkers for tomorrow’s trek had arrived. Tents were laid out all around the house to accommodate them and there was contention for all the resources in the house from food till bathroom. When resources are in short supply, people let go of courtesy and staying at such place is no longer enjoyable. We had come in the anticipation of washing ourselves with hot water. With one bathroom catering to 25 odd people, that wasn’t possible. Naren, Pradeep and I washed ourselves in the cold water of the running stream. Though it was extremely cold, it was simultaneously refreshing after a hard day’s trek.

We were given a room inside the house and most of us were carrying our own sleeping bags. Already crowded house became even more crowded with the arrival of BMC crowd. In all there were more than 50 people staying in that house with two toilets and 1 bathroom!  Things were in such short supply that Sathish struggled to provide us the required floor mats. As the tired trekkers hit the bed, BMC folks started playing Anthakshari and the idiots refused to stop even after our objection. Finally Sathish had to intervene to settle the matter.

Some of us got up as early as 5AM on Sunday to use the most precious resource, the toilet! We had asked to our guide to take us to a hill locally called Chundi that is located adjacent to Hirumarguppi peak. This route is not frequented by many and we hoped to get some real trekking experience since there wasn’t any well marked route to this peak. While Chinmay, Austin and Prashanth preferred to stay back, Pradeep, Preeti, Naren and I started on the 2nd day’s trek at 8AM.

The initial path is via hills covered by fern shrubs and it soon led to grassland where the head-high grass was seen at many stretches. The ascent was also very rapid and we felt like doing some real trekking. We started attacking the Chundi peak head on and were doing some serious ascent on its grassy slope. We reached 1235m at 8.50AM, 1500m at 9.45AM an with just one tiny break we reached Chundi peak (1630m) at 10.15AM. 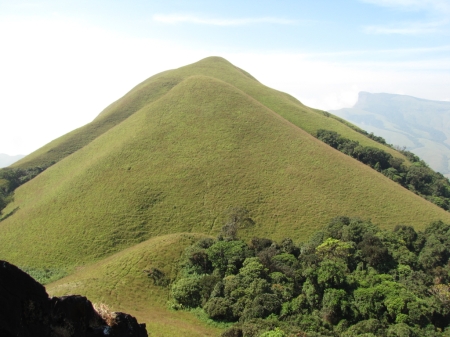 Unlike yesterday where we had reached Kudremukha peak in the afternoon, we were at Chundi peak well before noon. The cloud cover wasn’t there and we got good views of the peaks around. In fact Chundi offers a very good view of the Kudremukha peak and the abrupt fall in the rocky face of Kudremukha peak is nicely visible from Chundi. We started the descent at 11AM. To make the descent interesting, we choose a different route that consisted of multiple adjacent hills and we planned to take the ridge line to cover all those and then descend at the last hill. This part of the trek turned out to be very good with nice views of the charmadi range on the other side. The route involved multiple ascents and descents and the extra grass growth made it more challenging. At one point the descent was so steep that sliding down was an easier option that walking down. We also passed beside a cluster of rocks that had all the signs of an active bear den.

We hardly took any breaks and reached Mullodi at 1.30PM and had a nice bath in the river. By 4PM we reached Kalasa, visited Kalaseshwara temple and then proceeded to Horanadu where we joined rest of our folks. After a good dinner at the Annapoorneshwari temple, we started back to Bangalore.